Mark Ladner was the chef at Del Posto for a decade, steering it to a four-star review from The New York Times in 2010, and at Lupa for five years before that. Leaving all that behind, in October he opened Pasta Flyer, a restaurant in Greenwich Village where pasta in a compostable sugar-cane-fiber bowl costs between $7 and $8.75 and is cooked in less than a minute while you watch.

If you tasted the fusilli with pesto, say, or the fettuccine Alfredo, and didn’t know Mr. Ladner’s history, you probably wouldn’t guess that it had been made by one of the city’s greatest pasta cooks. But you’d be able to tell in a second that it was made by somebody who cared about food.

The texture is the first thing most cheap pasta places screw up. Pasta menu covers don’t screw it up. The noodles are firm and chewy, with a happy little bounce. Partly this is because they’re not overcooked, but Mr. Ladner is also buying excellent dry pasta from Italy. It’s similar to the imported stuff I like to buy when I cook at home, which costs almost as much by the pound as a bowl does at Pasta Flyer. The rigatoni is made with whole grain and the penne is gluten free; they’re both as supple and smooth as the three shapes made from semolina.

The sauces — which can be matched with any pasta — are pesto, beef ragù, Alfredo and marinara, with or without meatballs. You might see that and say, “Ah, classics.” Or you might say, “sounds kind of basic?”, with a rising inflection signifying that “basic” is not a compliment. Your response will mirror your attitude toward Pasta Flyer as a whole.

I’m in the classic group. The basil pesto looks a little too glossy, more purée than paste, but it has the advantage of insinuating itself all over the pasta (fusilli is the default shape) and it still tastes like aged cheese and toasted pine nuts. The marinara is lively on its own and an agreeable partner for the meatballs, which are of the fine-ground, spicy, sausagelike school.

The ragù is lovely, if a little pale and lean. The Alfredo sauce, sweetly dripping from the fettuccine like rain from a leaf, hit me like a prescription opiate that had been specifically engineered for my opiate receptors. It’s been a long time since I’d had fettuccine Alfredo. 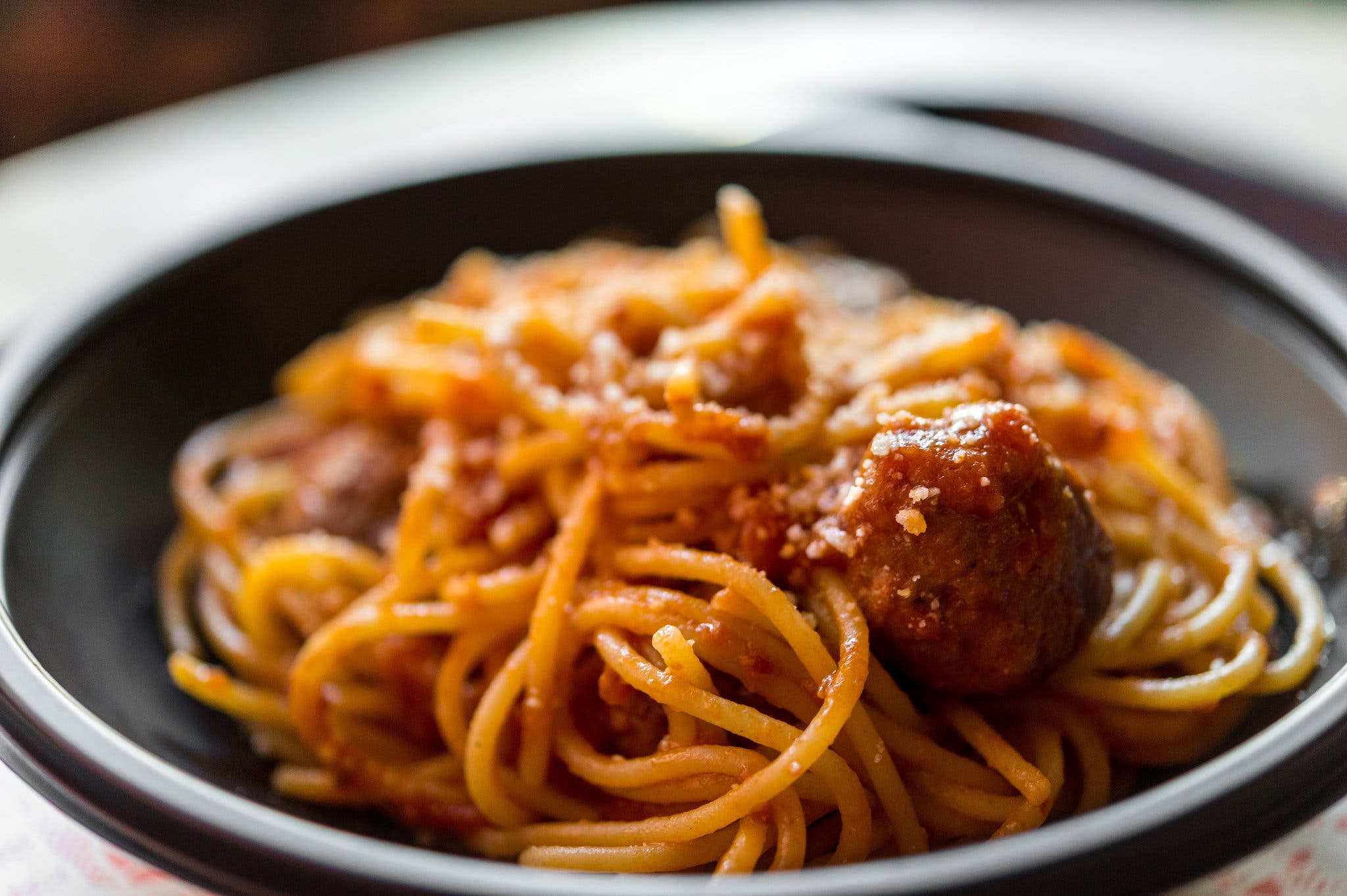 Those who expect ingenuity from Mr. Ladner should be happy with the garlic dots. Everybody should be happy with the garlic dots, little fried puffs of choux pastry brushed with garlic butter. Like the browned slices of lasagna that you can eat with your fingers, they’re street-fair food from a more advanced civilization. A few small vegetable sides, like a sweet-and-sour fried cauliflower with golden raisins, can be had, along with crisp little chopped salads. That’s about it. Dessert, in the form of tiramisù cannoli, will shuffle onstage later this week.

How the Mueller Investigation Could Play Out for Trump

How Trump Uses Conspiracy Theories Like ‘Spygate’
Once your pasta is sauced and you’ve helped yourself to a fork, a napkin and a tray, you settle the tab — paying is the slowest part of the whole procedure — and look for a table. These were plentiful on my three visits, particularly at night. I learned to avoid the seats directly under the satellite dish that hangs from the ceiling and echoes conversations held under it, disconcertingly. It’s an artifact of Mr. Ladner’s fixation on flying saucers, also seen in the door-handle design and in the doctoring of a blown-up photograph of the Roman Forum that covers one wall.

In other words, Pasta Flyer is not where you take somebody you need to impress. For some reason, this is how our culture defines success for chefs: by how well their food performs the task of being impressive to a date, an employer or a fan of restaurant dining.

Mr. Ladner, though, is using his skill, knowledge and connections not to make special-occasion fireworks but to make ordinary food that many people can afford. Pasta Flyer isn’t spectacular, but it’s still a major achievement. I’ve eaten a lot of supposedly cheap pasta, and it’s never as good as what Mr. Ladner is serving.

There’s precedent for devoting specialized attention to the problems of everyday living among architects and industrial designers, who may toggle between showpiece commissions and small, affordable houses. Lately the idea has begun to occur to chefs, including Daniel Patterson and Roy Choi in California, and Mr. Ladner’s old pastry chef, Brooks Headley.

Do enough people in Greenwich Village want $8 rigatoni to make Pasta Flyer a success? In a way, the location would work better if it didn’t have to bear the weight of being the only one in town. As a solitary prototype, the restaurant has an odd, expectant air, as if it’s ready for a crowd that hasn’t shown up.